I was interviewed by the Lawyer’s Daily regarding my concerns with the Bencher Code of Conduct (the “Code”) implemented by the Law Society of Ontario on the eve of my election as Bencher last year in a highly contentious election.

Below I summarize my main concerns with the Code.

The Lawyer’s Daily article can be found here:

The Code is incorporated into a document called the Governance Practices and Policies (“GPP”) found here:

My primary concerns with the Code and the GPP document into which it is incorporated are twofold:

1) The Code seeks to fetter the discretion of Benchers and restrict the exercise of their judgment on highly political issues contrary to their fiduciary and common law duties as Benchers; and,

2) The complaints mechanism deviates from typical governance documents by placing a single individual (the Treasurer) in the role of investigator, judge, jury, and executioner.

After my election as Bencher, I immediately voiced my concerns with the Code upon being advised that my adherence was a new requirement of becoming a Bencher.

I provided a limited adherence by stroking out the most offensive section.

In January 2020 I delivered notice that I was rescinding my adherence to the Code in its entirety.

Part 1, section 1(4), page 4 of the GPP purports to require benchers to govern the practice of law and the provision of legal services in accordance with certain fashionable political stances favoured by the last Bench.

4. In keeping with the statutory principles above, Convocation is committed to
governing the practice of law and the provision of legal services in a manner that will
a. achieve a reduction of barriers created by racism, unconscious bias and
discrimination;
b. achieve better representation of Indigenous licensees, racialized licensees and
licensees from all equality seeking groups in the legal professions; and
c. advance reconciliation, acknowledging a collective responsibility to support
improved relationships between Indigenous and non-Indigenous peoples in
Ontario and Canada.

I further question whether it is the role of a public interest regulator to govern with the primary objective of manipulating the demographics of the professions to achieve better representation of certain groups vs other groups, as seems to be required of Benchers by section 1(4) of the GPP.

There is also concern that the Code introduces conflict for Benchers by requiring them to elevate their fiduciary duties to the Law Society organization above the statutory public interest mandate.

Why did the last Convocation enact the Code?

We know the last Bench was quite comfortable restricting the expression, thought, and conscience rights of their colleagues with the Statement of Principles.

So its no surprise they’d set out to restrict the privileges and judgment of future Benchers on highly political matters.

I note that former Benchers Anne Vespry and Rocco Galati had concerns that the Code would restrict their ability to speak out against the Law Society or its policies.

Despite the assurances of people like former Bencher Peter Wardle, it is being used for precisely that in the case of Bencher Goldstein who was cautioned by Treasurer Mercer for publicly stating his belief that the Law Society was operating a deficit (a true statement).

The Code is being weaponized both inside and outside Convocation to attack Benchers and it is having a chilling effect on debate and expression.

I believe it was the objective of the proponents of the Code to bring Benchers in line and compel them “to speak with one voice” (as was stated by former Bencher Rebecca Durcan at the time), and to constrict the discretion, judgment, and expression rights of Benchers.

Both Treasurer Donnelly and the new Chair of the Audit and Finance Committee Bencher Joseph Groia voted against adoption of the Code at the time.

I believe the new Code Working Group struck by Treasurer Donnelly is confirmation that the Code needs to be revisited and I look forward to working with my colleagues to address these issues.

“Equity advisory groups are accorded a special status in this place,” said Brown. “They have no fiduciary duties to the public, or the membership, no duty of confidentiality, and, I suggest to you, no accountability.

D. Jared Brown’s remarks in support of a motion at the Law Society of Ontario seeking to introduce good governance and accountability measures in Equity programming for the legal profession in Ontario. 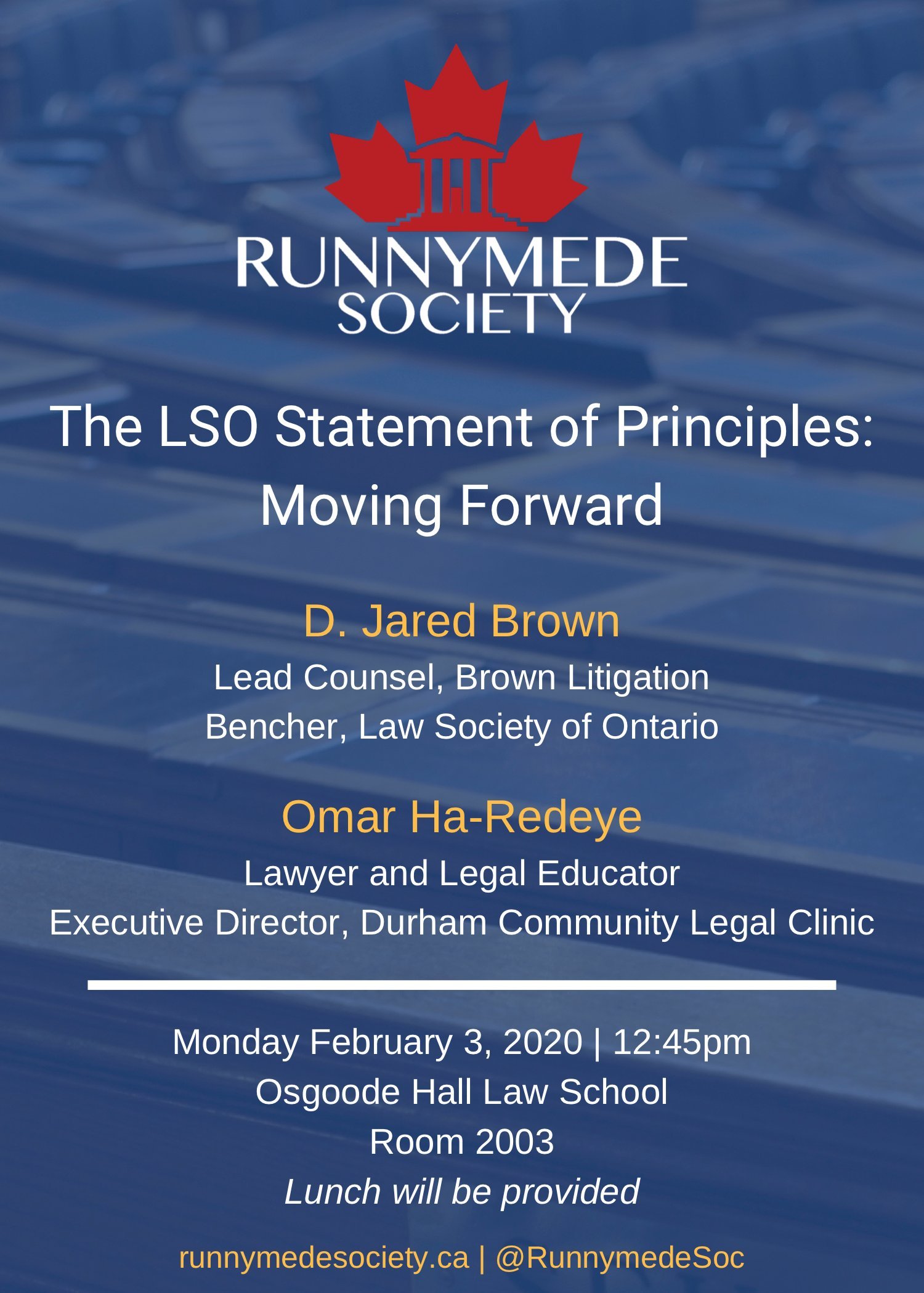 #stopsop and the 2019 Law Society Bencher election is the #2 top story impacting lawyers in Ontario in 2019 according to Law Times.

“The Law Society of Ontario’s board of directors was elected in spring 2019, ushering in a wave of change in the approach to diversity and inclusion.”